It has been an exciting few weeks in Karambayam, where the mobile-phone-based Enrolment-cum-Rapid Risk Assessment exercise conducted by the Sugha Vazhvu Guides is underway. While the Enrolment process itself is something that we’ve, in some sense, mastered – with the clockwork efficiency that marked the very first deployment in Andipatti far exceeding our expectations – using the Guides, with their profile and work culture starkly different to the short-term-hired Enrolment Officers, was untried.

We launched on 26th September 2011, with 10 Sugha Vazhvu Guides. The Guides were incentivised, over and above their monthly honorarium, using two pay buckets: up to 24 complete and error-free forms a day would fetch them Rs. 2 per form; 25 and above forms a day Rs. 4 per form. Performing above the 25-a-day benchmark would result in doubling of compensation on the total number of forms, and not the differential over the slab. The idea was that the difference between 24th and 25th forms is sufficiently great so as to make every Guide want to hit that 25th form. In setting the bar at 25 forms a day, we drew from our experiences with the field pilot, going in with the approach that we’d rather set the bar higher and lower it later if necessary, rather than begin with low expectation. Given the underlying thought process behind the Guide model, our idea of her as a seamless extension of the RMHC and participating as a mini RMHC in the community that she serves, we were mindful of the risk of going down the slippery slope of “commoditising” community health work, but we also realised that a short, intensive one-time task such as this calls for an incentive structure with a strong link to performance.

The reporting design is that the Guides’ first points of call are the 2 Health Extension Workers – former Guides who play the dual role of Guide Managers as well as RMHC-based physician extenders. The designated Field Supervisor for this exercise manages the implementation on the field, and provides technical support and any troubleshooting. The ICTPH researcher’s direct contact, while minimal relative to the rest (with the intention of decentralising the process), would be sufficiently enough to have that constant pulse of the happenings unfolding on the ground.

Initially, for the first week, the Guides met at the clinic every morning, with the Field Supervisor giving them a daily briefing – common errors of the previous day, things that worked well, what they should be looking out for, etc. End of week one onwards, once they were well on the uptake of the learning curve, the daily briefings were reduced to a one-hour weekly session, with the Guides coming in at any time of the day for the syncing of the phones with the RMHC’s  WiFi connection.

The Guides began very cautiously the first few days – sometimes so cautious as to fill out and send the exact same Enrolment form seven times as if to ensure that it traverses through the uncertainty-ridden world of mobile and computer networks and reaches its rightful destination! There was a sense of mystery and awe about the wonders of the GPS – when we asked them initially at training about what they understood GPS to be, one of them answered that it was a way for us to keep an eye on the Guides – track if they were filling out forms sitting under a tree or if they were actually at the respondent’s address! All the Guides are in agreement about the ease of surveying using the mobile-phone application – a significant progression from the paper OMR forms. They were all learning at different paces during the training with a couple who took to it with remarkable ease, while others committed far too many errors, and it is very commendable that all of them have perfected the technicalities, and in fact, it is one of the Guides who seemed to struggle with the form on the first few days is now among the top performers in the field. 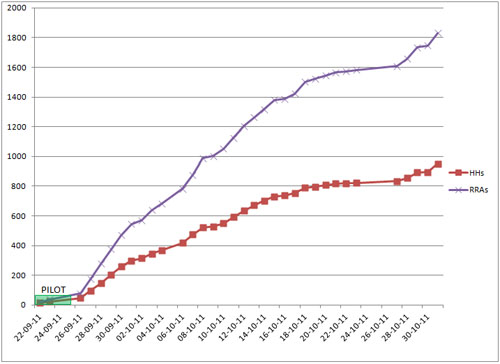 The progress graph shows the number of Household Enrolments and RRAs completed from the launch up until the end of October.

The performance of the Guides was slower than we expected, forcing us to relook at the 25 forms a day bar. We revised it to 22 forms, effective from 4-Oct-2011. Admittedly, there has still been some slack, especially around the time of the Puja festivities, the local body elections (in which 3 of our Guides contested), and Deepavali. The inter-Guide performance has also been greatly varied, reinforcing the necessity for serious performance and consequence management.

Above is a picture from the meeting with the Guides at the end of week one. Here they are being showed individual figures of Enrolments and RRAs by day for the first seven days of the exercise. 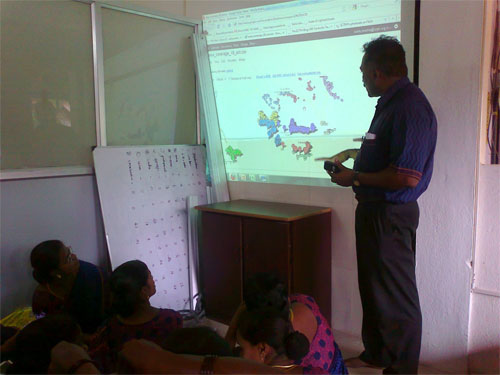 At the weekly meetings of the Guides, charts of their previous week’s performance are shown to visual represent both collective progress and individual progress, and the outstanding performers are acknowledged. Given that it is often non-monetary incentives that propel the motivation of Community Health Workers, they are reminded of how crucial their work of identification of high-risk individuals in the village is. Information about the patient traffic, with the numbers of people coming in to avail the high-risk vouchers, specific instances where patients have said that they have greatly benefitted are all shared with them reminding them of their role in this system. They aren’t all used to the idea of full-time work or working every working day, and the challenge over the next few weeks will be to sustain their motivation and bring renewed vigour into the exercise.