Today, society is surrounded by an excess of food, luxuries and comfort, making humans prone to being obese and sedentary. For instance, being overweight or obese are major risk factors for developing insulin resistance, diabetes, hypertension, lipid disorders, heart disease, cancers, arthritis, psychosocial disorders and several other health issues. The prevalence of overweight and obesity is increasing phenomenally in the global population. In particular, India is also experiencing an enormous increase in obesity levels. A recent study1 determined the trends in overweight in an urban population since 1995 and observed significant increase in overweight especially among the women (Figure 1). 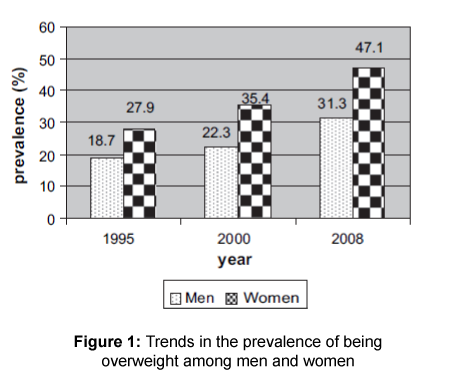 In other words, as the body mass index increases, the prevalence of cardio-metabolic risk factors like pre-diabetes, diabetes and hypertension also increases. Important to note is that the increase in risk development is not proportional to the increase in body mass. Group II (overweight) versus group III (obese) did not show any significant difference in the prevalence of all three major cardiovascular risk factors, thereby stating that the underlying risk in overweight category is similar to that of the obese category, confirming the hypothesis of the Indian phenotype. This hypothesis suggests that despite having lower body mass index, Indians tend to have increased body fat especially around the abdominal region resulting in central obesity which increases insulin resistance and thereby development of diabetes and cardiovascular risk.

In addition, the study found that Metabolic syndrome (MS), which constitutes the presence of any 3 out of 5 risk factors – increased blood glucose, hypertension, low HDL cholesterol, high triglycerides and high waist circumference, was present in 21.7% of normal weight, 45.4% of overweight and 60% of obese subjects. There was a 176.4% increase in the prevalence of metabolic syndrome from normal weight to the obese group. MS is a powerful risk factor for developing coronary heart disease- and these figures are suggestive of a huge disease burden in the future, in terms of morbidity and premature mortality, healthcare costs and loss in economic productivity.

Tackling overweight and obesity is complex and challenging, and must be considered public health priority. At ICTPH, we recognize that it will require an intervention that is multi-faceted and one that engages the commitment and involvement of all concerned bodies such as the ministry of health, policy makers, health care staff and retailers.

The paper can be accessed here.