After much anticipation and a lot of hard work, the women’s health intervention was launched on Friday, October 14th, 2011 at the Karambayam Rural Micro Health Centre (RMHC). In addition to the regular RMHC staff (Dr. Suganya, and the health extension workers (HEWs) Ayilrani and Vanasundari), two nursing officers, Viji Govintharajan and Menaka Subramaniyam, and a second physician, Dr. Priya Parimalam, were also posted to the Karambayam RMHC on the day of launch. Viji, Menaka, and Dr. Priya had received training for VIA/VILI examinations at the Adyar Cancer Institute, and were in-charge of implementing the women’s health examination.

Three women underwent the women’s health examination on the day of launch. Our first patient had heard about the women’s health examination from community members who had attended one of the meetings organized by us. The remaining women had visited the Karambayam RMHC with unrelated complaints, and agreed to undergo the examination after being convinced of its benefits by the physician and nursing officers. One patient was diagnosed to be positive for cervical abnormalities by VIA/VILI examination. She was referred to a higher centre (Jeeva Memorial Hospital) for further care, and a follow-up was scheduled to keep track of her treatment. In addition to testing positive by VIA/VILI, this patient was also diagnosed with cervicitis and vaginitis. Of the remaining two patients, one was diagnosed with vaginitis, and the other was not suffering from any infection. In fact, our last patient of the day had been diagnosed with cervical cancer a year earlier, and had undergone chemotherapy at Thanjavur Medical College Hospital. Her negative VIA/VILI results indicated that she was well on her way to recovery.

While the launch got off to a smooth start in general, there were some minor speed bumps that we had to overcome. On the day of launch, we learned that Karambayam was scheduled for a power shutdown from 9 am to 5 pm on October 14th, spanning most of the operating hours of the RMHC. As a result, our autoclave could not be used for sterilizing instruments. Our nursing officer Menaka had planned ahead and autoclaved a few sets of instruments in advance, which allowed us to proceed as planned. The examination lamp connected to the table could also not be used because of the power outage. Fortunately, our neighbours at the cycle shop generously provided us with a strong torch light, which proved to be quite effective for cervical visualization! However, these inconveniences were rather short-lived because power returned by around 1 pm. During the course of the day, it was also decided that to avoid alarming the patient unnecessarily, movement into and out of the room would be restricted. With regards to the HMIS, a problem we encountered was that some of the chief complaints had not been updated. However, this was quickly taken care of by the technology team. Another problem that is currently being resolved by the technology team is that of the print version of the report given to patients. The printed report did not show the details of the VIA/VILI examination, and the observed results. Since it is important that the results be clearly mentioned, especially when patients are referred to higher centres of care, this is an issue that needs to be worked on immediately. 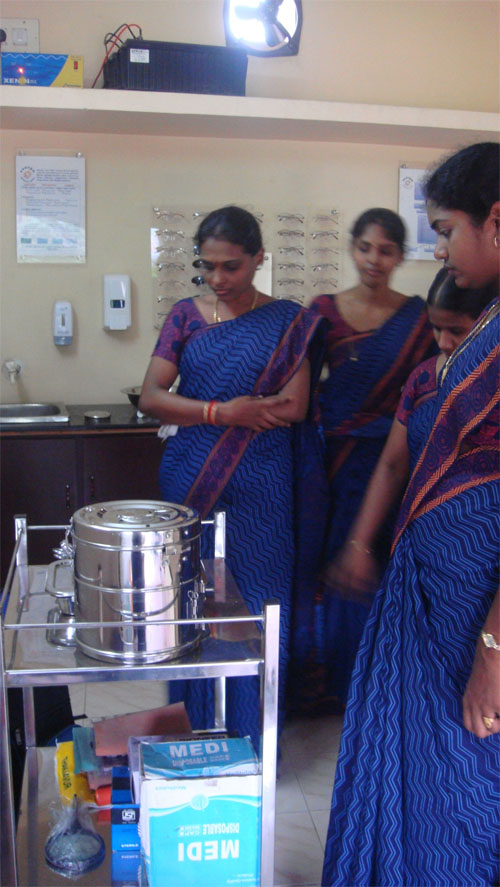 Staff at the Karambayam RMHC prepare the instruments tray for VIA/VILI examinations. 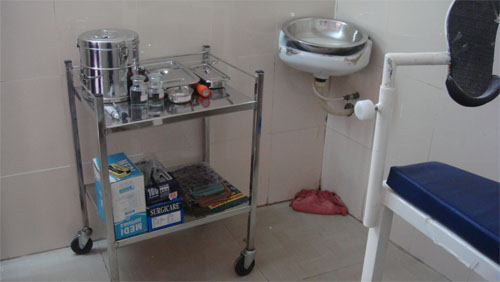 Since the launch of the women’s health intervention on 14th October till the 29th of October, 2011, 60 patients visited the Karambayam RMHC. Of these, 45 were adult women who were eligible for the women’s health examination. This skewed usage of our services by women at Karambayam has been reported earlier by Deepak Rajanna (http://share.ictph.org.in/profiles/blogs/data-insights-visits-by-gender). 13 of the 45 women consented to the women’s health examination, and VIA/VILI was performed (Figure 1A). Two of the 13 women have been found to be positive by VIA/VILI examinations, and have been referred to a higher centre for care (Figure 1B). Of these two, one woman has already undergone a confirmatory Pap smear test and is awaiting the results. Nine of the 13 women who underwent the examination were also diagnosed with RTIs. Of these nine women, four had vaginitis, and five suffered from cervicitis (Figure 1C). Interestingly, both women who were found to be VIA/VILI positive were also found to have other RTIs. Additionally, two women who were VIA/VILI negative and not diagnosed with any RTIs, were detected to have cervical abnormalities such as erythroplakia and Nabothian follicles. The patient with Nabothian follicles has also been referred to a higher centre for care.

Figure 1. The women’s health intervention by numbers. (A) Graphical representation of proportion of women who chose to or not to undergo the women’s health examination, and reasons for not undergoing examination. (B) Graphical distribution of women who tested positive and negative for cervical abnormalities by VIA/VILI. (C) Proportion of various RTIs in women diagnosed to be suffering from infections.

Based on an analysis of the data from the HMIS, it immediately became apparent that there are some very important issues that must be resolved for the women’s health intervention to be truly successful. One of the major outputs of this programme is that all eligible women within our catchment area in Karambayam are screened. In the first two weeks of our intervention, out of around 2,670 eligible women in Karambayam, we have screened 13 women. In order for us to screen more women, a two-pronged approach must be taken. First, more women should be made aware of the women’s health programme, thus resulting in increased traffic to the RMHC. Second, more women who visit the RMHC with unrelated complaints must be convinced of the benefits of the women’s health examination.

An important question in the women’s health protocol information is the reason for refusal of the VIA/VILI examination. This question was included to gather information on reasons for refusal, so that we might pre-emptively target issues while attempting to convince women, either in the RMHC or during our awareness campaigns, to opt for the examination. However, as Figure 1A reveals, no reason for refusal was recorded in the women’s health protocol information page for 28 out of 32 cases where the examination was not performed.

Of the 32 women who chose to not undergo the women’s health examination, two had undergone hysterectomy, thus precluding the need for VIA/VILI examination (Figure 1A). Two women quoted “not having enough time during their current visit” as the reason for not choosing to go through with the examination (Figure 1A). Appointments were rescheduled for these women, and they were asked to return at a later date for the examination. However, these appointments were not honoured and they were not followed up by our RMHC staff.

Moving forward, it is imperative that the issues mentioned above be addressed in the short-term for the women’s health intervention to be successful. The current version of the women’s health intervention is the first step towards the achievement of improved health of women in our communities. In future, we will add components that will be directed towards women of other age and developmental groups. A “pregnancy package” is already in the works, and will provide routine check-ups for pregnant women to prevent or treat any nutritional deficiencies, and pregnancy-specific conditions such as gestational diabetes and pre-eclampsia. The so-called “marriage package” will focus on providing micronutrient supplementation to women pre-conception. For example, good clinical practice recommends that folic acid supplementation be provided to women one month before pregnancy and during the first trimester to prevent congenital malformations. Evidence-based practice will be used to develop a nutritional package that will help in the birth of healthier children. Another intriguing idea is that of a school-based nutritional intervention for adolescent girls. Research supported by the Micronutrient Initiative analysed various studies of iron supplementation, and recommended that weekly iron supplementation of adolescents is as effective as daily supplementation, if strict supervision and high compliance can be assured (Beaton and McCabe, 1999). School teachers can likely be convinced to supervise the intake of weekly iron supplementation. Such school-based interventions are an effective way to engage with our communities, and a school-based dental/vision intervention is currently being developed. The lessons from this intervention can be used to design the school-based nutritional intervention for adolescent girls.

Beaton, GH and McCabe, GP (1999). Efficacy of intermittent iron supplementation in the control of iron deficiency anemia in developing countries – AN ANALYSIS OF EXPERIENCE. Final Report to the Micronutrient Initiative.

Excellent blog post. Very pleased to learn that the intervention has been launched successfully.

Congratulations on this intervention. Best for its continued success.