In a country like India – where Iron Deficiency Anaemia among children exceeds 70%, the top two causes of pre-mature mortality are CVDs (24.5%) and COPD/Asthma (10.2%) and the highest burden of disease measured in terms of DALYs is Unipolar Depression (9.17%) followed by Ischemic Heart Disease (5.80%) – the entire healthcare system could perhaps be very different from one in which infectious diseases account for the principal burden of disease and disability. In the former, our vision may be to provide for universal annual screening of every individual using standardised screening protocols and to give primary care (perhaps integrated within a managed care framework) a much, much higher degree of importance relative to secondary and tertiary care, while in the latter case our vision may be to do the reverse.  If indeed our vision is the former, then even in terms of health financing it may require us to move significantly away from a principal focus on paying for tertiary/secondary care using insurance or other fee-for-service schemes, to one in which formal disease and wellness surveillance at the community level become the principal drivers of payments. This would also have serious implications on our deliberations on the manpower question – formally qualified nurse practitioners (as in the US) working in rural clinics may well be required in much larger numbers in the former vision, versus more MBBS Doctors in an alternate vision.

A cross-sectional census socio-economic survey was carried out in three selected villages (Karambayam, Nattuchalai and Alakkudi) in Tanjore, Tamil Nadu by the IKP Centre for Technologies in Public Health (ICTPH) in 2008. The selection criteria was based on the presence of a government primary health centre (PHC), presence of Kshetriya Gramin Financial Services (KGFS), a total population of approximately 3000 people, and proximity to the nearest town.

Out-patient expenditure was categorised as cost of medicine, average hospital/NH charges, consultation, investigation cost, transportation cost, other cost and reported loss-of-wage. Weighted class averages for listed categories were computed using Excel. An average cost per episode of Indian Rupees (INR) 176/- for medicines, INR 19/- for hospital/NH charges, INR 28/- for consultation, INR 53/- for investigation, INR 48/- for transportation and INR 39/- as other costs were reported. The total per episode cost for seeking out-patient care was INR 445/-. The reported average loss-of-wage was INR 82/-. 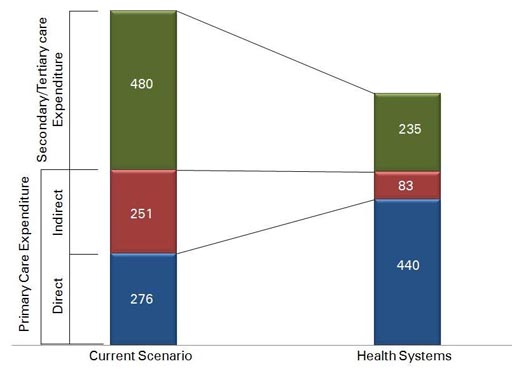 IKP Centre for Technologies in Public Health (ICTPH), a not-for-profit research organisation with its mission to innovate inclusive health-systems for remote rural populations, is anchoring a pilot with a Thanjavur, Tamil Nadu based partner organisation, SughaVazhvu Healthcare. In the current scenario, the annual healthcare expenditure per individual computes to INR 1000/-, implying that for a family of four it aggregates to an average annual expenditure of INR 4,000/-. As shown in the figure, indirect costs relating to primary care, i.e. transportation, loss-of-wage, accompanying individuals, food etc., account for 50% of primary care expenditure. Also, the current utilisation of out-patient services is only 1.02%, i.e. individuals seeking care on experiencing an acute illness. The health system understanding at ICTPH hypothesises a larger un-diagnosed disease burden which is reflecting today in only loss of productivity, given both accessibility and affordability of primary healthcare facilities plays a crucial role. The health-system modeling exercise at ICTPH reveals the trend as indicated in the above figure. A direct intervention at the primary-care village level through health-extension workers, and a village based nurse managed clinic – Rural Micro Health Centre (RMHC) provisioning diagnostics, consultation and drugs will directly impact the indirect expense associated with primary care, whereas optimal health seeking behavior of the population seeking timely screening and curative services will accentuate their primary care direct expense. However, a managed healthcare provider, can directly impact the secondary/tertiary care expenditure through timely intervention impacting both the severity and duration of an episode requiring a referral.

Overall, our Health Systems approach aims to offer a ‘complete’ solution to populations we serve, by health-expenditure smoothening through continuous screening, provisioned primary care at the RMHC and an established referral mechanism.