The period between 6 and 24 months is a critical stage in a child’s growth and cognitive development, which can be severely hampered by nutritional deficiencies. Iron deficiency anaemia is extremely widespread among children across India, with Tamil Nadu recording a prevalence rate of 72.7% in the age group of 6-35 months in the last Indian National Health and Family Survey-3 (2005-2006). With this in mind, earlier this year, ICTPH had launched the infant nutrition intervention aimed at reducing the prevalence of anaemia in the age group of 6-24 months.

One of our three Rural Micro Health Centres (RMHCs), namely the Karambayam RMHC, was to serve as the research site where we intended to pilot a study assessing the effectiveness of a service delivery model of a home-fortification powder called Sprinkles, an odourless, flavourless microencapsulated powder that is added to complementary foods. There were a number of roadblocks and challenges to the implementation of the study, whose results thus far we will share shortly in a report. But the case of this one infant from the study was very heartwarming for us all, and personally for me, meeting with her the defining moment of the implementation of the project. At a time when the project’s success seemed an uphill battle, hearing the mother’s story, her gratitude to us, her conviction in us, redeemed my own faith, and the implicit trust she has in us only makes one even more mindful of the tremendous responsibility invested in us as healthcare providers.

*Names have been changed to protect confidentiality.
All pictures are produced here having sought prior informed consent from the mother. 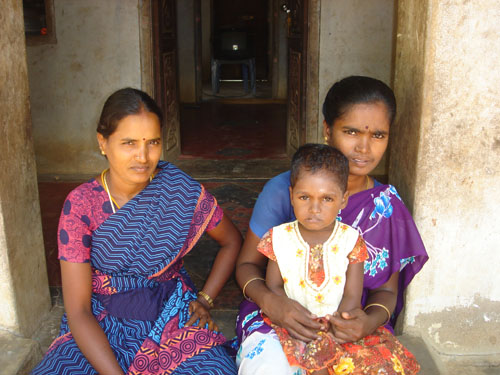 Narayani (right) outside her home, with her daughter Anusha, and Pushpavalli the Sugha Vazhvu Guide

Narayani lives with her mother and daughter Anusha in Ettupulikaadu hamlet in Karambayam. Her husband works in the Gulf and she manages the family’s field with help from her mother. In November 2010, Anusha was diagnosed with a complex renal cyst, and underwent a surgery that December. Narayani says that ever since, she has had great trouble eating and became weak and tired. Her only child, born after many years, she was extremely concerned, and sought care from various healthcare providers. Pushpavalli, the Sugha Vazhvu Guide, visited their house in May to administer a baseline nutrition survey and anaemia education. Narayani also received a voucher to avail a nutritional assessment of her child and a free Haemoglobin test at the RMHC. The test result of Hb 9.7 g/dL indicated that Anusha was mildly anaemic, and she was suggested Sprinkles. Narayani says that physical and activity-level changes were evident within 2 weeks itself: “Earlier she used to sit dull and idle, now she takes a great interest in everything that goes on around her. Her appetite has greatly increased. Earlier feeding her used to be such an ordeal – she would simply not eat at all. ” Sixty days later, the Sprinkles course complete, her Hb level is 11 g/dL; Anusha is healthier, there is a marked improvement in her activity levels, and Narayani is much happier.