It was while waiting under the dim light of a community center late one evening in Karambayam, wondering how many women would attend our meeting after a long day’s work that we truly understood the challenges involved in community engagement. The World Health Organization (WHO) defines community engagement/participation as ‘A process by which people are enabled to become actively and genuinely involved in defining the issues of concern to them, in making decisions about factors that affect their lives, in formulating and implementing policies, in planning, developing and delivering services and in taking action to achieve change’. This process can range from consultations with few select power holders to citizen empowerment through decision making authority for local citizens. “The Health for All by the Year 2000” campaign of WHO, with community participation at its core, led to the adoption of this concept by many countries as a means to address important health problems. Today, community participation is viewed as a key to not only raise awareness of health issues, but also to make people aware of their healthcare rights, and to encourage them to demand the best services of their healthcare providers.

ICTPH and SughaVazhvu recently launched the women’s health programme at the Karambayam RMHC. An important component of the women’s health examination is cervical screening using the tests VIA and VILI. While the tests are simple, a speculum examination by its very nature is invasive. Therefore, before launch of the women’s health programme, we were concerned about its reception in a relatively conservative community such as ours. To inform women in the community about the importance of this programme and get an understanding of how receptive they would be to such an initiative, community engagement appeared to be the most ideal channel. These face-to-face meetings would also allow us to talk to the women directly to dispel any fears they might have, and help them make an informed decision about the screening.

Based on feedback from our nursing officers Viji and Menaka, we decided to reach out to women’s self-help groups (SHGs) as a first point of contact with women in the community. An SHG is a village-based group of 10 – 20 local women who come together voluntarily to make small savings contributions until a critical limit is reached to begin lending. Interestingly, financial intermediation is no longer the primary objective of these SHGs. They have evolved into groups whose goals include empowering women, inculcating leadership abilities among the poor, and increasing health awareness among women. It turned out that some of our SughaVazhvu Guides (SVGs) in Karambayam were either members or leaders of such SHGs. Through our SVG contacts, we met with four SHG leaders (two in Karambayam, and one each in Ambalapattu and Ettupulikkadu), told them about the women’s health programme, and requested their help in organizing meetings with members of their respective SHGs. All leaders were very appreciative of the initiative taken by SughaVazhvu to develop a health initiative focused on women, and agreed readily to help organize the meetings. However, there were some stumbling blocks we encountered while organizing these meetings. Most SHG meetings are called in the first couple of days of the month, and gathering women on other days of the month is a challenge. This mostly has to do with the fact that women have to take care of the home, children, and field work leaving them with very little time for anything else. Additionally, the municipal elections were also around the corner, and were taking up whatever little free time women had. In spite of these challenges, four community engagement meetings were organized prior to the launch of the women’s health intervention.

Each meeting was attended by 10 – 15 women. Our nursing officers Viji and Menaka began each meeting by asking the assembled women a few questions to understand their perceptions of healthcare in general, and also specifically of SughaVazhvu. They then gave an introduction to SughaVazhvu and the services provided, including the women’s health intervention. Women were told about the importance of regular cervical screening, and about signs and symptoms they should look out for. Finally, a video demonstrating the examination was shown to allay any fears and to prepare women for what they should expect during screening. Throughout the course of the meeting, women were encouraged to participate and get their doubts clarified as they arose. 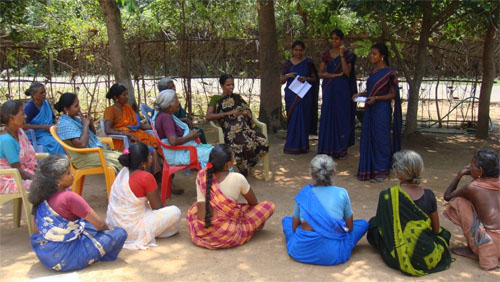 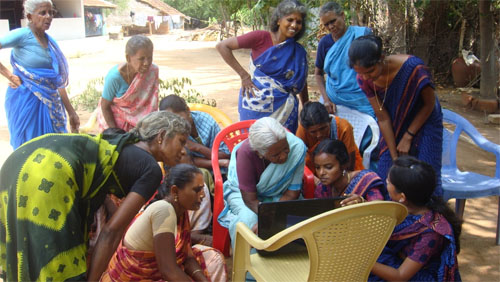 As part of the community meeting, women are shown a video of the pelvic and speculum examination by SughaVazhvu nursing officers.

All meetings were very lively with women in the community eager to learn more about the women’s health examination. Interestingly, most women were aware of the concept of cervical screening, having heard of it from other sources such as the SHG meetings. Though the Tamil Nadu state government had organized a cervical screening programme a few years back, most women we met had not undergone the screening because they were not completely aware of the benefits of the programme. Explaining the importance of screening and the potential health benefits provided them with the tools they needed to make an informed decision about whether or not to undergo screening. An important lesson that was reinforced for us from these meetings was how much women value their voice being heard, and the sense of gratitude they feel for being allowed to express their opinions and ideas.

Our exercise in community engagement has been an interesting experience for all involved. Given that women’s health is an issue of great sensitivity and requires women to trust us as healthcare providers, we will continue to engage with our community on a consistent basis. Constant reinforcement of our message of preventive healthcare through community engagement will help us build a community of empowered individuals who are best equipped to make thoughtful healthcare decisions.