SughaVazhvu organised its first RMHC-based camp for cervical screening during the weekend of February 25th and 26th, 2012. The screening camp was organised in Kavarapattu on the 25th, and Okkanadu Melaiyur on the 26th. These RMHCs were chosen because they provide cervical screening services on a daily basis, and therefore have all infrastructure required to perform these examinations. The cervical screening examination and medication were all provided free of cost on camp day. There were two primary objectives behind conducting these camps:

The training was conducted by the team of Dr. P.O. Esmy of the Christian Fellowship Hospital at Ambilikai, Dindigul. In addition to Dr. Esmy, the training team also consisted of two staff nurses. Dr. Esmy’s team is part of a cervical screening project under the aegis of the World Health Organisation (WHO) and the International Agency for Research on Cancer (IARC). SV staff members who participated in the camp included all our HEWs – Vanasundari, Ayulrani, Premavathy, Prema, Saranya, Praba, and Josephine, women’s health trainers – Viji and Vanitha, and physicians – Dr. Suganya, Dr. Uma, Dr. Shanthi Priya, Dr. Shanthi, and Dr. Saranya. In both Kavarapattu and Okkanadu Melaiyur, two independent screening stations were set up. The trainees were split into two groups, with each group assigned to a screening station.

The training team and trainees outside the Okkanadu Melaiyur RMHC on February 26th, 2012.

Women who walked in for screening first signed the consent form for the examination and were then enrolled. Subsequently, they were issued a token number and an abridged PISP was performed to assess CVD risk. Visual acuity was not measured because of time constraints. Those at risk for CVD were issued vouchers and asked to visit the RMHC at a later date for further assessment.

Sharmila, Administrative Officer at SughaVazhvu, enrols a woman for the cervical screening camp. 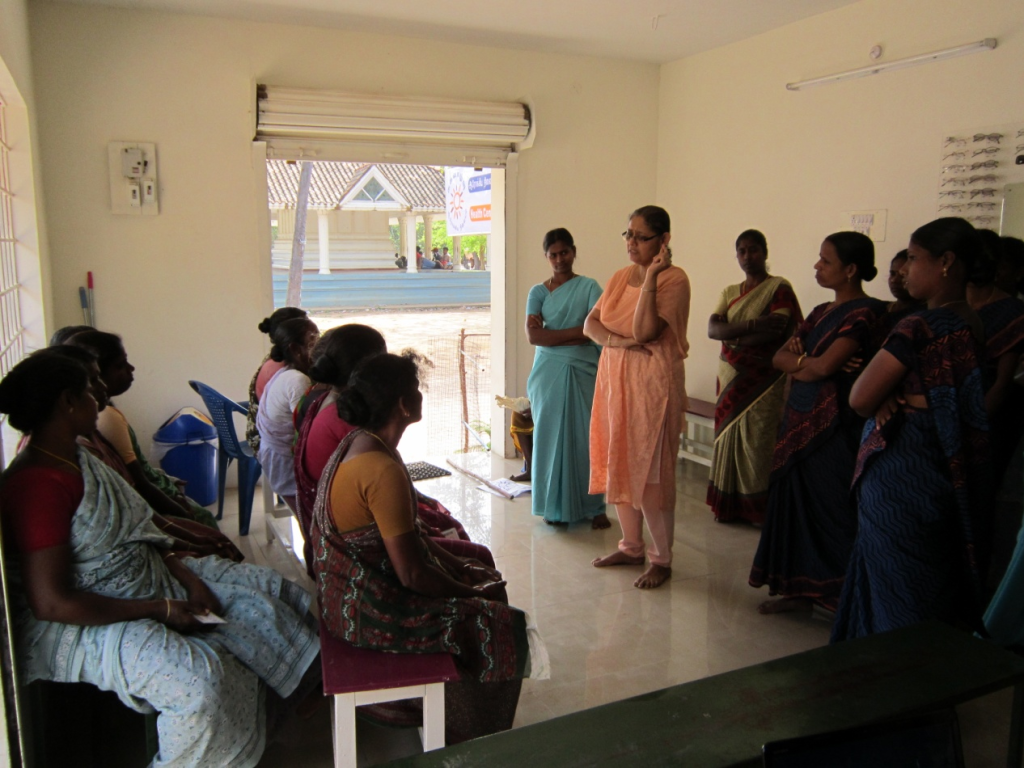 Dr. Esmy of the Christian Fellowship Hospital addresses women assembled for the camp on the importance of preventing cervical cancer through regular screening sessions.

We screened a total of 109 women on both days of the camp. The break-up of data for each RMHC is as follows:

While organising a camp requires a lot of thought and effort, the camp-based approach to screening has some very obvious merits. In terms of sheer numbers, we were able to screen 109 women over two days during the camp, most of who were first time visitors to our RMHCs. In contrast, we have screened 100 women in Karambayam over the last five months, 67 women in Kavarapattu over 2.5 months, and 40 women in Okkanadu Melaiyur in over a month via opportunistic screening. This is not to say that opportunistic screening does not have its advantages, but that a combination of opportunistic and camp-based screening might eventually become necessary for us to be able to screen all eligible women in our catchment areas within a reasonable time frame.

The camp approach also provides us with numerous opportunities to engage with community members. For example, the fact that we performed an abridged version of the PISP allowed us to assess risk factors for all assembled women. Risk assessment is the cornerstone of our preventive approach, and the camp allowed us to carry out this assessment of a large number of first-time visitors. In addition, risk assessment provided us with the perfect segue to talk about our focus on prevention, whether it is through management of risk factors for CVD or early detection and treatment of cancer. Thus, we were able to raise awareness about the importance of cervical screening, and at the same time highlight some of our other interventions.

In terms of training, the camp-based approach proved to be a success. By focusing only on cervical screening for two days and performing VIA/VILI examinations on their own, our HEWs became much more confident about their ability to independently screen women. While they will require continued training to hone their skills, this camp has provided the initial confidence that HEWs require to start performing VIA/VILI. Additionally, the camp also helped to further familiarise our master trainers with the screening and diagnosis process. Ongoing training of our master trainers through camps such as these is critical to the success of our training model.

It is my hope that this cervical screening camp is the first of many community-based activities organised by SughaVazhvu. I am convinced that this approach to community engagement and training can be applied to showcase our other interventions as well. We are now planning on conducting a vision camp, where visual acuity will be measured and refractive error correction performed. I am hopeful that by organising such events, we will be able to more clearly communicate SughaVazhvu’s vision to the communities we serve, and encourage community members to access our services.